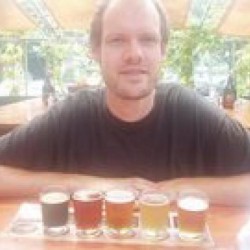 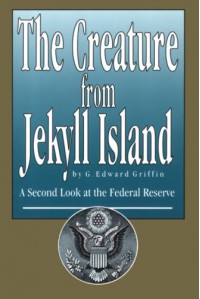 I have finished nearly every book I have ever started but I will not be finishing this one. I apologize for the slipshod nature of what follows. This has been a trying experience for me.

I totally believe him, that a conspiracy existed to create a cabal / oligopoly. I think he has met that burden of proof rather easily, but…

He seems to not fully understand what money is, i.e. his fundamental understanding of (really) basic economic theory seems off (compared to his understanding of practical economics, which is great). He picks an arbitrary point for the value of the dollar and claims the Fed has devalued it. But that’s only relative, as the dollar, like all money, is a fiction. It’s socially created; it’s relative. So you’re not necessarily saying anything unless you can demonstrate that the Fed has been the primary causal force in the worst devaluing of the dollar since the dollar has existed, and of course he cannot say that.

These books that blame everything on a particular institution always make the same assumption: that not only would life be the same without it, it’d be better. But I don’t know of a developed country without a central bank (that could be ignorance on my part). And though there are certainly better ways of setting up a central bank than how the Fed was set up (and that is something we could go into if you want to talk about it), the idea of a central bank in theory seems pretty central to modern economies. He can make no real claim that we’d be living in this kind of world without usury and excessive lending, as that’s how our economies, for better and worse, have been functioning. Yes, the Fed should be reformed. But don’t pretend that broad investment and rapid economic development can occur without insane lending practices.

His first example in Chapter 3, about the fraud with the railroad, is really alarming - people should have gone to jail. But the other examples he doesn’t present arguments for. His argument is this: I am opposed to bailouts personally, therefore bailouts are bad; I accept no other arguments than the economic one. And that’s not convincing to anyone. I generally deplore corporate welfare (depending on the situation), but if I had written a book where one central tenet was that corporate welfare was bad, I would at least try to tell you why, beyond “everyone should pay their debts”. That’s an argument? It sounds like a tenet of a religion.

He claims that if we all suffer the consequences of bad debts we will learn from our actions and avoid them in the future. He seems to think if we had a completely free market, we would learn from our lessons. It’s like he’s never studied history in his life. The history of humanity is a history of repeat mistakes. He seems to believe that government regulation - i.e. the laws that would prevent these banks from even being in these ridiculous positions, such as we have in Canada - is inherently bad, and yet he wants people to live up to an impossible standard.

The statement where we can all stop taking him seriously occurs on page 62 of my copy: “Voters and politicians were silent on the issue, apparently awed by the sheer size of the numbers and the specter of economic chaos. Decades of public education had left their mark.”

From this point on, I stuck with the chapter summaries for the rest of the part. In another chapter summary he blames the Savings and Loan crisis on the New Deal. I am over simplifying slightly, but seriously. If it weren’t for socialism we wouldn’t have all these people trying to rob others of their savings?!?! Has the man not watched Glengarry Glen Ross?

He talks about the four different types of money and how paper money isn't "real" and though I understand where he is coming from, I have to object. He claims Gold has intrinsic value whereas paper does not. But I don't know what the intrinsic value is of gold is; it's just historically treated that way, you know? You can't really do anything with it. At least oil is clearly productive. But I also worry that countries stuck on the gold standard might not have had the same explosion of technology and wealth that we've had in the last 80-90 years (or what have you). Maybe I'm wrong about that, but I think it's ridiculous to claim the world would not only be the same but better if only we'd stayed on gold. And he makes some really odd claims about how any economy with paper money is always worse, but he provides only two examples in all of human history (in this chapter) and he doesn't seem to be accounting for the fact that, for example, he might have written the book on a computer, which is a product of the paper-money society he lives in. Anyway, it's frustrating but at least this money theory part is less crazy than the earlier stuff.

He says that inflation is a “hidden tax” and that the reason it exists is so these evil governments can spend more money. But this doesn’t make any sense: as the currency is devalued, his argument is that we have less purchasing power? As does the government, no? Did I miss something.

I’m pretty sure he’s a monetary determinist. He seems to think that currency crises are the prime causal force in (at least) national politics.

His claim that the colonies were the first big European paper money economy do not hold up to a) my own reading (see France in the early 18th century) and b) his own evidence later on, where he provides stories of banks that issued paper money more valuable than coins well prior to the American colony examples he provides.

Griffin believes we should just take his word for it that the Politicians and the Bankers are out to get us. Outside of the opening chapter, he rarely focuses on the actions of identifiable individuals or groups and instead makes blanket statements about how the Politicians (who were not yet a profession, but anyway…) wanted something or the Bankers. But if I am to believe him, I need actual people who existed in history.

He starts calling politicians or bureaucrats (not sure which) Political Scientists, in perhaps the worst use of the already bad term I have ever seen. I know what he’s trying to say, at least I think I do (they were experimenting on the taxpayer with their schemes!) but, seriously, call a spade a spade. The derogatory tone does not convince anyone who doesn’t already believe him.

Where I sympathize with Griffin is on usury: I understand his point about not wanting to pay interest on money that is supposedly intrinsically worthless. I get why is offended. And it's easy to see the source of the massive wealth gaps in today's society from this problem. But we must remember that all decisions come with costs. When you say banks should not charge interest on fiat money you are saying in reality a lot more. Because, like it or not, this is a world created by fiat money and usury. If leaders cannot charge interest on this "fake" money, why would they invest? You can't just flip a switch and reverse hundreds of years of history. (I am speaking of the world, not just the United States.)

On page 192 of my edition he makes a solid point about financial serfdom to a super rich nobility and he's not wrong about that. I'm just not sure the primary causal source of it is central banks. It's one of the causes, no doubt, but the primary one? There are other countries with central banks that have far less massive income divides, both currently and in the past.

He seems to not know who is targets are. He talks about "elitist social planners" benefiting from the system as if government bureaucrats and the super rich are one and the same. He also says their plan is to punish the middle class. This is ridiculous. Extraordinary claims require extraordinary evidence. He doesn't provide any for these claims.

On page 207 of my edition he claims that every nation in history with a fiat currency was destroyed by that currency. He does not provide examples (obviously he is alluding to his earlier examples, but there are only a few). This is the time to provide a complete list. In a book this big, you'd think he could have afforded a page for a list (or an appendix). There might be other causes, too, you know?

He says all wars result from fiat currencies. What about all the wars between countries using gold or other precious metals?

On page 232 of my edition he claims the Rothschilds are responsible for every war the UK was involved in between 1689 and 1815. Again, extraordinarily claims require extraordinary evidence.

His history WWI is all well and good, though it requires a broader perspective, but he fails utterly to connect the dots for his thesis - sure these banks profited, that doesn't mean they caused the war. This is a textbook case of the historian's fallacy.

And on the advice of my therapist (only half joking), I stopped there, slightly more than a third of the way through the book. A waste of time and energy. And a massive missed opportunity on the author's part.